Skip to content
Originally published in alt.theatre vol. 10.4 (Summer 2013) Download a PDF version of this article By Rosemary Georgeson with Savannah Walling

As theatre artists involved in Vancouver’s Downtown Eastside in British Columbia, we—Rosemary Georgeson and Savannah Walling—have been friends for over ten years and have collaborated on various projects together. We’ve also spent a great deal of time sharing with each other about other projects we’ve had on-the-go in rural and urban communities, bringing together what we’ve learned through our mistakes and discoveries, our successes and our practices. We’ve thought that this dialogue—which evolved through our conversations and relationship—would be of interest and relevant to our larger arts community. 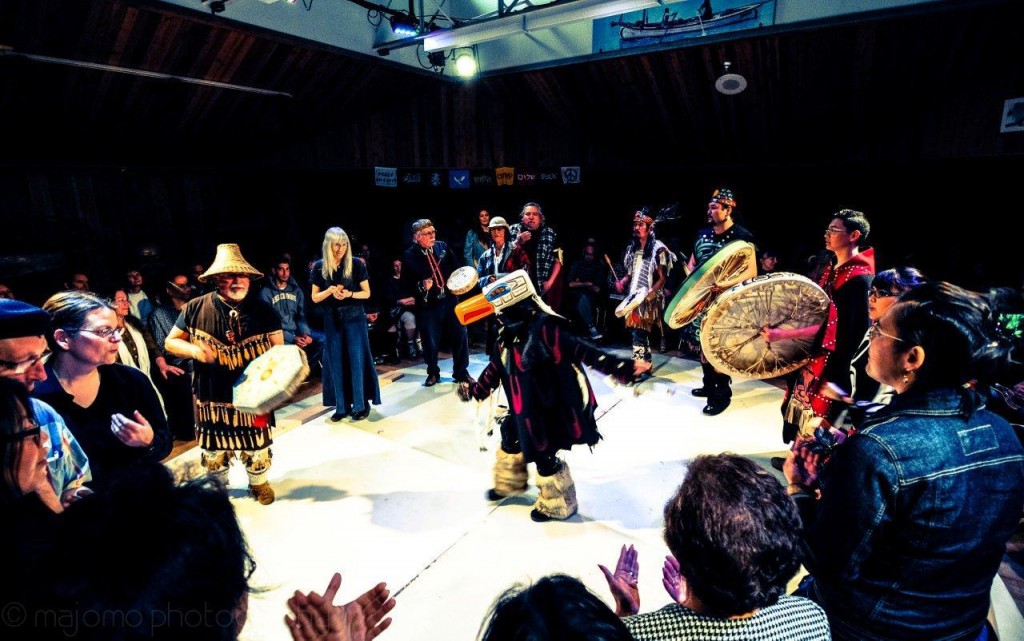 Rose As a fifty-five-year-old First Nations woman, it is only in my lifetime that we as First Nations people have been accepted in theatres and presenting houses. We could perform but we were never audience members. My culture has always had its own theatre and forms of community arts, but the Canadian government shut them down from the 1880s to 1951. Although many of our cultural traditions continued underground, our voices are only coming fully back into the public now. Just that knowledge of this legacy explains the need for creating relationships inside First Nations territory that you are situated or entering. Years ago I was at an arts conference participating in a workshop on how to engage First Nation communities in the arts. I heard a theatre producer speak about going into a Northern community with his show and how much effort and money he put into getting his show there. He was very angry that no one even made an attempt to come out for his production. When I asked about his outreach process, he had no response and seemed irritated that I would ask that question. He did say that when he mounted a production anywhere else, he didn’t need to do outreach—he had PR people to do that for him. He made it quite clear, though, that he would never again attempt to take a production into a First Nations community. This was a turning point for me, hearing him speak this way about First Nation people and the arts. It was through the encounter with this gentleman that I started looking at the need to develop and build lasting relationships within our communities and between communities. Savannah As a sixty-seven-year-old mostly Anglo immigrant from the US whose ancestors fought on both sides of the Revolutionary, Civil, and Indian wars, I’ve seen big changes over the years in relations between non-First Nation and First Nation people. When I was born, Aboriginal/First Nations people were commonly called “Indians.” Indians in Canada were forbidden to vote, buy land, practise their cultural customs, or hire lawyers to pursue land claims. Men lost their Indian status if they joined the Canadian military. Most Indian children were taken from their families and sent to residential school. I was taught at public school—where there was usually not an Indian in sight—that Indians were a dying culture and Indian people would soon be assimilated. Today however, the old government restrictions have been lifted. According to the 2006 Canadian Census, the Aboriginal population is growing faster than the general population. Because of the amount of unfinished treaty business in B.C., treaty negotiations with First Nations are ongoing. Due to a history of broken trust between First Nations and immigrant communities, building relationships is foundational. Three Coast Salish Nations are embedded within and around the City of Vancouver where I live and work. Today’s world is a very different world than that of my childhood. As a result, just about the most important step of my training and practice as an artist has involved learning to negotiate relationships with First Nation community partners, artistic colleagues, and community participants.

Every community and every individual is unique. No single approach suits every situation.

Rose Relationship building is an ongoing process that does not happen overnight, but it is an essential key to opening doors to make a community arts project all-inclusive and to building relationships with First Nations communities. This applies to all aspects of interaction within our communities. Entering into a new community arts project is always a challenge. It takes time to build relationships and to ensure that your project is all inclusive. Building trust is so important. Take the time to go out and meet the people you want to connect with. We First Nations people have centuries of experience of our stories and ways being misappropriated—just taken and misconstrued into what non-First Nations thought they should  be. This makes for bad feelings and mistrust when others enter into our communities. Savannah I’ve made some serious blunders on creative journeys involving First Nations cultural content and collaboration: mistakes due to ignorance, inexperience, cultural misunderstanding, working too fast and not putting in the time needed to build relationships. So I’ve done a lot of learning the hard way. As a result, some projects never made it to completion. A couple of others almost foundered, but instead of giving up, we interpreted the obstacles as a signal to take more time—and that was what was needed. The most important principle I’ve learned is that respect is the foundation of relationships. Rose While working for urban ink productions a few years ago in Williams Lake on the Squaw Hall community arts project1— and after making a few mistakes there—our team realized that we needed to have people from the community to help us find our way. As we were merging deeper into the community and getting to know more people, we started to talk with them about forming an advisory committee. The idea was met with appreciation and relief: We were asking them to become more deeply involved in our project and the community would have a much stronger voice regarding the work created. The committee was such a great resource for finding how we could best serve Williams Lake and the surrounding Nations and honour the stories they were sharing with us. Our committee was made up of people from that territory, First Nation and non-First Nation peoples, and men and women from all sectors of the community—from Aboriginal educators and a chief to a First Nations liaison for the health department, a city councillor, a reporter/author/historian for the local newspaper, and local businesspeople. Savannah Over the years, I’ve come to appreciate that engaging with First Nation communities means engaging with values and ways of life that are distinct from Canada’s immigrant-based cultures. In practice this has meant occasionally reminding production stage managers that body language and everyday cultural interactions can differ. Some First Nations individuals will avoid eye contact as a sign of respect. Many non-First Nations people in strange, stressful situations learn to react with a lot of activity and conversation until they restructure the situation or extricate themselves from it. Many Indigenous people, on the other hand, when put into the same situation may remain motionless and watch until they figure out what is expected. Stage managers unfamiliar with cultural differences can interpret these responses as indicating lack of interest or trustworthiness. When looking for a stage manager for the Storyweaving project2 we kept in mind that First Nations culture has traditionally relied on an ethic of non-interference and voluntary cooperation. We looked for someone who was willing to learn about Aboriginal culture and traditional ways of demonstrating respect, and who was prepared to do their best to operate by the longhouse philosophy, relying on example and persuasion rather than authority and force. We reschedule and do “work-arounds” when we run into the kinds of situations some people call “Indian time”: unexpected delays relating to “the time things take to happen,” or “the time it takes to do things in a good way and when the time is right.” Delays also can happen when ceremonial events are happening simultaneously with the projects: the reality is that Indigenous participants and cultural leaders may have different priorities than those of the non-Indigenous artistic team, regardless of the project’s artistic interest and their commitment to it. We’ve also learned not to make assumptions about what Aboriginal culture is and what its customs may be. Every community and every individual is unique. No single approach suits every situation. Some Aboriginal people don’t know their own culture and language, which is due to the impact of residential schools and assimilation processes forced upon First Nation people. Some people are negotiating the tough challenge of “walking in two worlds simultaneously”: the world of the ancestors and the urban world of today. And some people are knowledge-carriers of their culture.

Projects can have consequences that are sometimes bad and sometimes good. By staying in contact with a community after the project is completed, you show your willingness to be accountable— and to stay in relationship.