Skip to content
The Big House is a theatrical feast created for, with, and about the founding Coast Salish and immigrant communities of the Downtown Eastside: a thank you from Vancouver Moving Theatre to the neighbourhood in which it was founded. At a time when our founding communities have damaged and broken relationships to repair and new relationships to forge where none existed, the Downtown Eastside needs community more than ever.  A hurricane of accelerating change threatens to displace residents and divide groups into those that matter and those that don’t.  How do we live and work together in the Downtown Eastside in the shadow of Canada’s history of colonialism and the city’s history of development?

“Our future and the well-being of our children rests with the kinds of relationships we build today.” - Chief Robert Joseph, Ambassador for Reconciliation Canada

Developed in partnerships with over five Downtown Eastside organizations and Toronto’s Jumblies Theatre, The Big House is all about connection.  It is about coming together under one roof to share with each other through food, stories and art. We are preparing a feast, creating a theatrical event and breaking bread together.  As we build The Big House – sharing resources, culture and good, healthy food – creative things can happen, new connections form and relationships renew.

“The Big House is a place for learning and teaching.” - Rosemary Georgeson (Coast Salish/Dene), Storytelling/Culinary artist 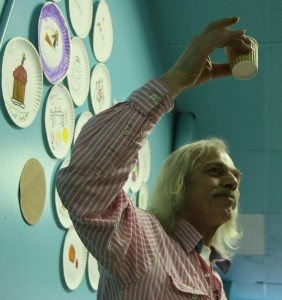 In the indigenous traditions of our neighbourhood’s founding communities, feasts are a time for nourishing relationships, marking important events, offering gifts and acknowledgements, sharing learning and teaching: a storehouse of memories for the future. The Big House is re-creating feasting in an urban context.   We will mark memories of our communities coming together; acknowledge land, waterways, and gathering places that keep our community strong; share cultural teachings around food and hospitality; mourn what has been displaced, lost or forgotten; listen to youth and elders, and honour the neighbourhood’s continuity, its wisdom. We are weaving together oral history and cultural teachings, poetry and song, drumming and design, theatre and dance with culinary art. Witnessing and creating shared memories, we celebrate who we are, acknowledge where we come from, what’s left behind, what’s preserved; we stand facing the future.

“As ancestors of tomorrow, we are caretakers, creators and witnesses to our communities and stories, who live on with new caretakers in each generation.” - Savannah Walling, Artistic Director, Vancouver Moving Theatre