Skip to content
SFU Woodward's Cultural Programs and Vancouver Moving Theatre in partnership with Full Circle: First Nations Performance are thrilled to present Bah! Humbug!, our annual evergreen favourite adaption of Dickens’ A Christmas Carol, with Jim Byrnes as Ebenezer Scrooge! Described by the Vancouver Courier as "A must see!", Bah! Humbug! is a great way to get into the spirit of the season. Each show features a turkey draw and an audience sing-along of holiday favourites before show start. Bah! Humbug! is reconceived as a tale where sushi-loving Scrooge owns a pawn shop on Hastings Street and checks his iPhone to time Bob Cratchet’s late arrival to work. The Spirits of this classic tale are re-imagined as emerging from Coast Salish territory buried under the sidewalks of today’s Downtown Eastside. This imaginative all-ages production offers a bittersweet twist on a cherished classic that celebrates the transformative power of human redemption. Juno award-winning singer and actor Jim Byrnes returns to the stage as Ebenezer Scrooge, and award-winning Margo Kane (2015 City of Vancouver Mayor’s Award - Theatre) returns to play the central role of the Narrator. Margo is also the Founder/Artistic Managing Director of Full Circle: First Nation Productions, which this year is welcomed as an associate producer by founding producers Vancouver Moving Theatre and SFU Woodward’s Cultural Programs. 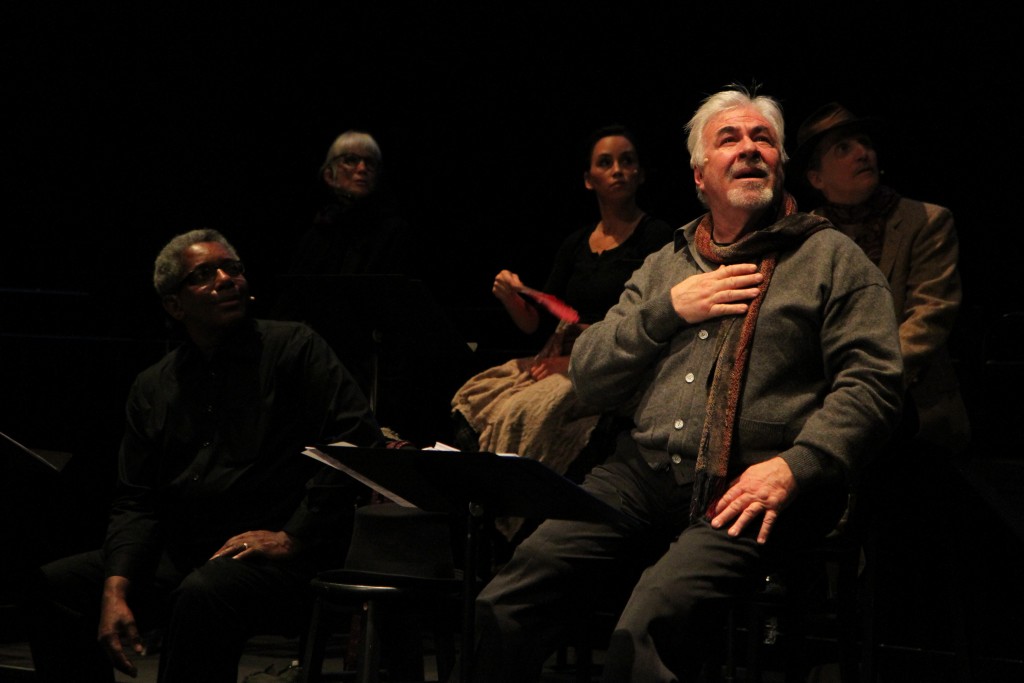 Bah! Humbug! features some of the city’s finest professional and First Nation actors and singers (Sam Bob, Jenifer Brousseau) on stage with Downtown Eastside actors and singers (Stephen Lytton, Mike Richter, Savannah Walling). Our adaptation of Dickens’ Christmas Carol has moved substantially from its origins with Charles Dickens, changing the theme from extolling charity to instead promoting social justice. Each year, the script is adapted to reflect modern, and specifically Downtown Eastside, issues. This year the backstory for Bob Cratchit has him on a journey of recovery—all done with a redemptive light. While the content deals with serious issues, Bah! Humbug! is also hailed as a creative, fun, family event filled with humour and compassion. The production embraces a modern songbook, and has more than twenty-five musical numbers ranging from traditional Christmas carols to First Nations songs and arrangements of modern rock, pop, and soul songs, including those by Buffy-Sainte Marie and Nine Inch Nails. The song list comes to life with the cast of exceptional singer-actors joined by the talented accompaniment of the acclaimed Downtown Eastside-based Saint James Music Academy Choir. Before each performance, audiences may join a sing-along carol session with members of the cast. The Downtown Eastside-themed setting comes to life with colourful large-scale mono-print and linocut projections of Downtown Eastside streets, waterfront, businesses and houses by award-winning Downtown Eastside/Strathcona-based artist Richard Tetrault. Proceeds from the show support the Downtown Eastside Heart of the City Festival, which partners each year with over fifty Downtown Eastside arts and non-arts organizations.