The following is reprinted from PuShing it, the blog of the PuSh International Performing Arts Festival. 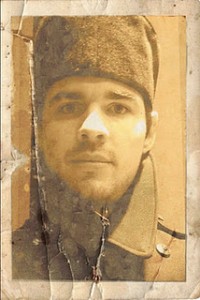 Both “Crime and Punishment” and now “The Idiot” mark a certain production style in your body of work. How did it start?

JAMES FAGAN TAIT: I had just finished working in the Downtown East Side with over 80 actors in a play, and I had done a few Ann Jellicoe-type community plays - one on Toronto Island, one in the Downtown East Side [In the Heart of a City] and six in Enderby with the Splatsin First Nations band and the City of Enderby - and I started believing in the power of large community and music and many people on stage of different variety. I realized that large shows with just a group of white professional actors didn’t have the same same resonance for me anymore. Camyar [Chai at Neworld] said that their mandate was diversity and I said “Can we have another field of diversity on stage: community artists, students, professional artists and artists who are not Equity?” So we did Crime and Punishment and the result was significant. We’re pursuing the same mandate with The Idiot: to create a culture in the cast.

Where did the idea for adapting “The Idiot” come from?

JOELYSA PANKANEA: I think Jimmy always felt it made sense after Crime and Punishment. He used to tell me back then, "We have to do The Idiot! That's the next one!" So something about it was right for him.

JFT: I first read it in 1982 for Ryerson Theatre School. I read Crime and Punishment and it changed my life. Then I laughed my way through The Idiot. And, after that, I always looked for people in my life who were those characters and I thought “I’m going to do this onstage”. I always knew I was going to do “Crime” – that was a for sure. After we did, I thought “Well, we did that. Why can’t a group like this do The Idiot? Dostoyevsky really had a different way of observing than anyone I had ever read.

What has been the life of this process?

JP: I can take you through the timeline of creating the music. I have been writing the score over the last year, we've done two workshops during that time. Each workshop consisted of four days in which we learned a TONNE of music. After our last workshop, Jimmy and I made final decisions about what pieces would stay in or be cut. For the last few months, I have been editing the score and the finished product finally got to Neworld a week before rehearsals started!

JFT: After “Crime” I said to Joelysa “We should do The Idiot with the same group. We then got a writing grant with no strings to any company. Camyar Chai said that Neworld might be interested in the next few years. (It ended up being seven years later). Peter Hinton at the National Arts Centre in Ottawa and Albert Schultz at Soulpepper Theatre in Toronto were negotiating Crime and Punishment. It was just too big but we were looking for a way to get that work to the NAC and to Soulpepper. So Peter wanted to then go into development on The Idiot. So I went on a “Translation and Adaptation” residency where I finished Part One of the play (there were going to be two plays). That was four years ago. Once that was finished Marcus Youssef at Neworld then expressed interest in having a reading of Part One, sponsored by the Belfry Theatre with 15 actors. That was three years ago. Albert at Soulpepper wanted to hear it so I went to Toronto and had a reading with the Soulpepper Academy. When I came back Marcus said that Neworld was going to go forward with the production in three years. We then got grants to finish the writing – which meant the second part of the play. It was supposed to be two plays over two evenings but it was decided that I could do it in one evening as one play. Part One was compressed into our Act One. Last January and February I wrote Act Two, which was books two, three and four of the novel. We had our first workshop this past August, another in September and now here we are.

What has been the biggest challenge in creating this adaptation?

JFT: Turning Books Two, Three and Four into a play, compressing that much information. It’s so different than “Crime and Punishment”, which is basically in one man’s head for three quarters of it until it goes into another man’s head for the last quarter (which I eliminated).
For “The Idiot” it was hard to take what is a polyphonic novel and turn it into something that has many fewer voices and to maintain its interest and beauty.

JP: Musically, the biggest challenge (other than the sheer size of the score) has been the musical arc of the story. I always found Dostoyevsky's writing 'not as smooth' in this particular novel. It wasn't until much later that Jimmy had told me that back then, this book would've come out as a weekly edition, piece by piece the story would be done, not all at once. I'm no Dostoyevsky expert, but I believe that he may have had a harder time writing this one than some of his others, and that might have been the 'fragmentation' I experienced and had such a hard time following. Also, it's usually trickier when dealing with books that are in large sectioned parts such as The Idiot.

What similarities and differences are there between “The Idiot” and “Crime”?

JFT: The Idiot moves from a redemptive place to one of despair, to bleakness. “Crime” is the opposite: it moves towards redemption where the criminal mind recognizes that, in order to live as a human being, he has to kneel down at the crossroads and beg forgiveness of the community. Then he can find redemption. In “The Idiot”, it moves in an opposite direction where a person coming out of an institution with his mind back intact after suffering severe mental illness is out in the community and he continually fails without his support group. He eventually loses his mind because he has not been programmed.

One is a descent and the other is an ascent. People who have seen “Crime” may have some recognition this time in Dostoyevsky and think “That reminds me of that time in Crime and Punishment”. But they’re very different novels, very different adaptations and the music is very different.

How do you find and create the “sound” for “The Idiot”?

JP: That's a huge question. Every theme comes from a different place, but I'll talk about the main theme only - creating a piece for a specific character. Nastasya is a character that is very complex. I'll spend a lot of time with the script until I really feel that I understand 'my version' of this person and I'll create the theme with my set of 'Nastasya-isms' in mind. I always know if I've come in at the right angle because the music comes cleanly, clearly and precisely.

JFT: The text is contemporary and the language is very current even though the play is set in another period. As I write, I write all the lyrics and where the music starts in the first draft. I’ll sit down with Joelysa and read through it and then I’ll sing through it for her (which is horrifying) so she can hear a little bit of the flavor of where it comes from in my brain. She can hear scanning and word stress and genre. I’ll also feed her lots of CDs for inspiration. She’ll then ask for adjectives to get a sense of the qualities of the music and we go from there.