This last spring and summer 2014 has been a lovely and deeply valued opportunity for both personal and professional journeys. In April, Terry and I travelled to California, Arizona and southern Utah to visit my American family, my high school boyfriend, and my beloved mentor dance anthropologist Dr. Joann Kealiinohomoku, former director of Cross Cultural Dance Resource Centre in Flagstaff, Arizona. We also visited our Navajo friends whom we had not seen for almost twenty years. The Navajo Nation is larger than ten of America’s fifty states; it is the largest Native American reservation in the USA.  I love the stark beauty, stunning rock formations, and juniper-scented desert air of the Four Corners region, located 5,000 feet above sea level on the Colorado plateau. The American southwest is my birth home and my spiritual home. We also had the good fortune of a stop-over in old town San Diego, where we joined a wonderful family reunion of the Wong Family from Chinatown’s Modernize Tailors. This summer I am having a wonderful opportunity to see a series of community plays across Canada: Following my trip to Nipissing, I will visit Toronto a few days to confer with Ruth Howard (Artistic Director, Jumblies Theatre) about our upcoming joint projects (spring 2015), and then head to Lawton, Oklahoma where I will meet my son Montana for a rare family reunion of the Walling clan. 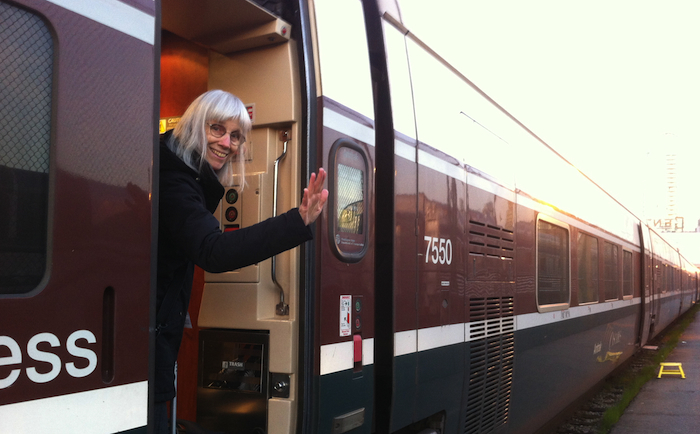 NEWS FROM MAPS & MEMORIES This spring VMT produced Maps & Memories: 4th Downtown Eastside Artfare Institute at the Ukrainian Hall, a three day workshop on researching and expressing community stories though oral history and mapping.  We wove the institute into goals and themes of VMT’s upcoming Big House and Train of Thought collaborative projects. The popular workshop was very fun, everyone learned and everyone benefited from the contributions of Squamish cultural teacher Wes Nahanee and elder Woodrow (Woody) Morrison, who trained as an oral historian since the age of three).  We followed Maps & Memories with three days of creative consultation on The Big House project with the artistic team, cultural consultants and community partners.  Over the course of the week we learned a lot more about False Creek and the city’s lost waterways and a deeper understanding of cultural protocols surrounding oral history and the sharing of stories.   UPCOMING NEWS We are making progress on Vancouver Moving Theatre’s new book, From the Heart of a City: Community Engaged Music and Theatre Productions from Vancouver’s Downtown Eastside 2002 – 2013. The text- and photo-based community arts resource book profiles numerous community-engaged productions produced in the Downtown Eastside since 2002 by Vancouver Moving Theatre, Carnegie Community Centre, Dalannah Bowen, Theatre in the Raw and Savage God; and features numerous by articles by leading community engaged artists that provide insight into the diversity of community engaged practice in our community. The book will be launched at the 7th Canadian Community Play and Arts Symposium and on the Train of Thought VIA Rail tour across Canada.